Showing posts from March, 2019
Show all

March 22, 2019
After much thought I've decided to stream -line my web presence even more and pull out of Twitter. As with my decision to pull out of Instagram, it's a matter of the time it takes away from other things.
Post a Comment
Read more 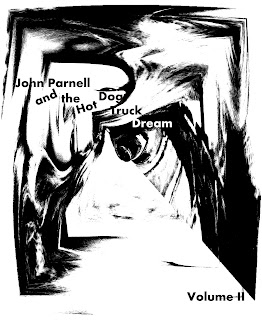 I am happy to release the artwork for the forthcoming album ( Volume II)  by instrumental hip hop project John Parnell and the Hot Dog Truck Dream.
Post a Comment
Read more
March 20, 2019
I haven't written one of these since January.......Fuck! Anyway, lots of things going on here at omicron! I've been a busy boy. I'm wrapping up a second John Parnell and the Hot Dog Truck Dream album. It's title is simply Volume II. Which is funny, I named it before I realized J. Dilla named an album Volume 2 . Also, I'm wrapping up a second album for Friend Fiction. It's title will be Music From: Have Chef We'll Travel (Volume II) . If your not familiar.....Friend Fiction is the moniker I use when making music for the Youtube show Have Chef We'll Travel. You can watch the latest show here . Also, on the docket, is the first album from 9 Meals till Anarchy. The title will be 5th Circle. I want to add a few more songs before I call it a day on that one. There are definitely two other projects rolling around in my head. But, I'm not ready to announce them as of yet. I have pulled out of Instagram. As it concerns OBS, Special Kitty, and/or omicr
Post a Comment
Read more
More posts